Let's stop the slaughter of dolphins in Europe ! 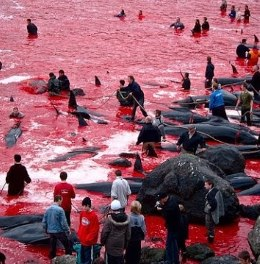 We are writing to you in the name of the NGO Sea Shepherd in order to request that France lodge a complaint with the International Court of Justice in The Hague against the Kingdom of Denmark for violating European community laws. In fact, we have photographic evidence proving that Royal Danish Navy vessels have several times assisted the boats of Faroese locals to hunt dolphins off the Faroese coast.

The Faroe Islands still perpetuate the barbarous and cruel practice of slicing through the spinal cord of hundreds of dolphins after having forced them to beach themselves in one of the islands' bays. This practice which is nearly 1500 years old and whose purpose used to be to provide the Faroese with a nutritious food source is no longer necessary these days. This gratuitous slaughter carries on within a society where the GDP per inhabitant is 52 000 USD. Furthermore, the consumption of dolphin meat has a very negative impact on health. According to the Faroese medical profession the levels of mercury, pesticides and lead contained in the meat of these marine mammals are actually extremely dangerous to human health.

On Thursday the 23rd July 2015 at approximately 18h, the Islands' villagers butchered nearly 250 pilot whales on the Tórshavn and Vágar coasts. During these two slaughters, seven volunteers from our Sea Shepherd organisation, one of whom is a French citizen, were arrested and accused of attempting to save these dolphins. Last year, on the 30th August 2014, fourteen volunteers, eight of whom were French, were arrested for having peacefully intervened in a slaughter taking place on the beach at Sandur. During this intervention and despite the activists' bravery on the beach, 33 pilot whales lost their lives.

Minister, we request that you intervene with the Hague Tribunal to lodge a complaint against Denmark for being complicit in the slaughter of protected species. We can provide photographic and video evidence that Royal Danish Navy vessels have assisted the Faroese police force in intercepting and arresting these volunteers who were trying to uphold European laws.

As a member of the European Union, Denmark should follow the European Community’s stance of aiming to « protect cetaceans (whales, dolphins, etc.) against hunting, capture or detention » by condemning the grindadráp (slaughter of dolphins in the Faroe Islands). It is thus France’s responsibility to uphold the European Council’s draft decision (dated 25th August 2011). According to Article 4 paragraph 3 of the Treaty of the European Union, this same draft states that « The Member States have a duty of sincere cooperation and should refrain from any measure outside of EU legislation which could jeopardize the rules of the Union or its objectives».

If we cannot compel the Faroe Islands to uphold the European Union’s recommendations, as they are not part of the Community, this treaty requires Denmark to not violate these agreements. Not only is Denmark transgressing European legislation by ensuring that the slaughters off the Faroese coast run smoothly, but it is also violating several other agreements and conventions which it has ratified via the European Union. Amongst which are included:

Currently included in annex II of the Convention on the conservation of migratory species, the long-finned pilot whale (Globicephala melas) and the short-finned pilot whale (Globicephala macrorhynchus) belong to migratory species which have an unfavourable conservation status, requiring international agreements to ensure their conservation. Pilot whales are included on the IUCN Red List of endangered species which furthermore considers that greater studies are necessary to determine the impact of potential threats on the species. It is therefore urgent to work in favour of the protection of pilot whales, a marine mammal which is protected throughout European Union territory.

In order to comply with international law, with current European legislation and with the conservation of marine ecosystems, we request you to lodge a complaint against the Kingdom of Denmark for the violation of European Community laws and to encourage your European counterparts sitting in the European Union Council to support France in this move.

Thanking you in advance for taking an interest in our appeal,